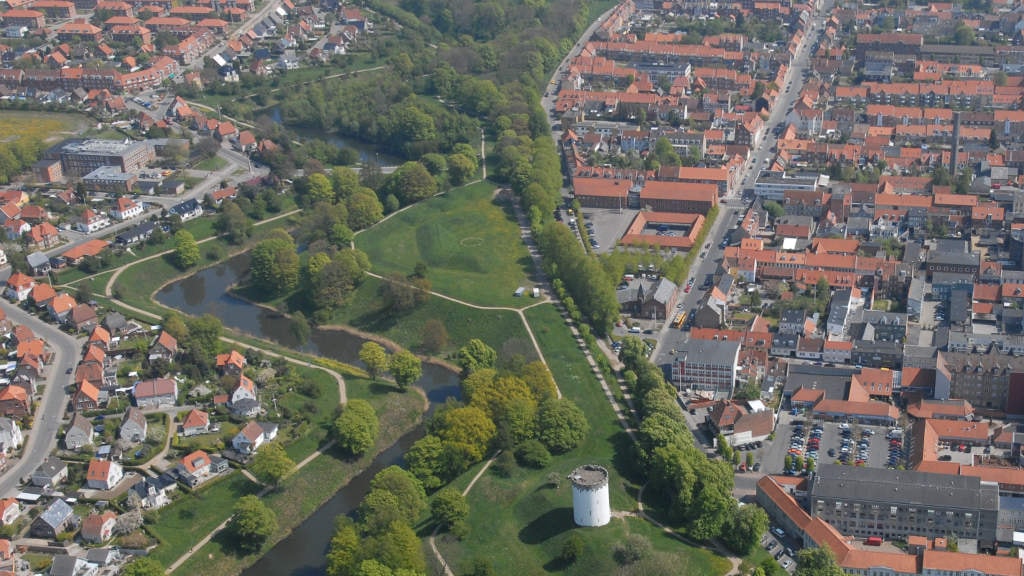 Fredericia is home to one of the largest and most well-preserved ramparts in Northern Europe. It is still complete with bastions, ravelins, moats and cannons.
Experience the great fortification which today forms a peaceful and beautiful frame around the oldest part of Fredericia. The ramparts were built to strengthen Denmark's defences in a time of war in Europe. The ramparts were built in 1650 by farmers, soldiers and convicts.

At the Battle of Fredericia on July 6th, 1849 Danish troops stormed through the gates of the ramparts during the night and attacked the besieging army from Schleswig-Holstein. The military manoeuvres that lead up to the attack are still considered a brilliant strategic achievement. The Battle of Fredericia resulted in one of the most important victories in Danish war history.

Fredericia is one of the few Danish cities which has been founded as a fortification in a location with no prior inhabitants.
The rampart facing land is about 1800 metres long. The two south and east facing ramparts by the water are both 1400 metres. These two ramparts are smaller than the one facing land. The total distance around the original fortification was 4600 metres. The ramparts including moats occupied an area of about 100 hectares. The town area inside the ramparts took up about 103 hectares.

The ramparts make one of the biggest urban parks in Denmark. About 16 km of paths around the ramparts provide plenty of options for walks or a run around the historic monument. The place is a visible part of both Fredericia's and Denmark's history.

In 1909 the military function of the ramparts was officially closed down and in 1917 it was placed under conservation. If you want to learn more about the ramparts, find the fascinating history of the ramparts here.

VisitLillebælt - Fredericia arranges a series of guided tours all year round at the ramparts - both for individuals and groups.