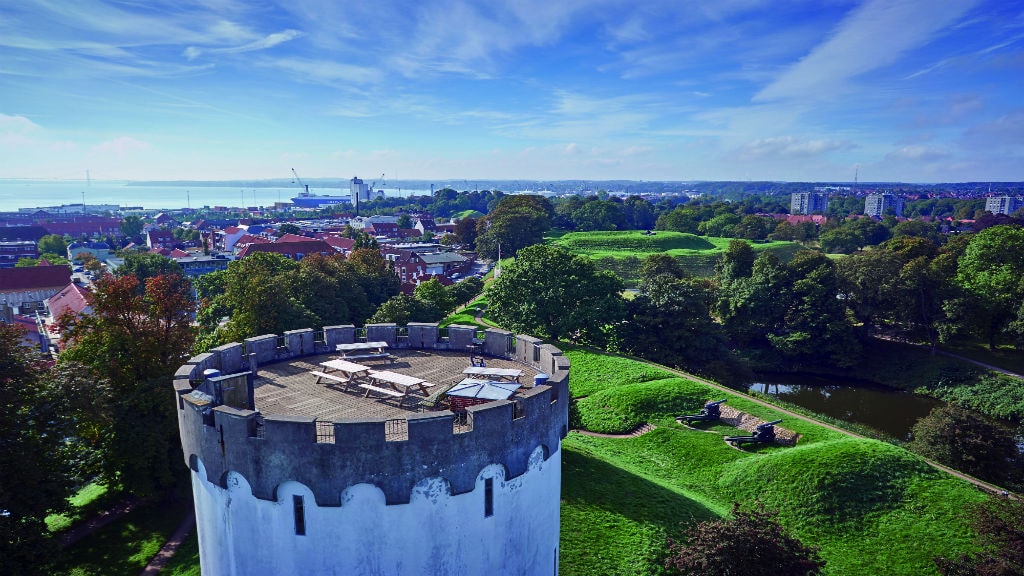 Fredericia is much more than ramparts and war history. Today, the city is undergoing rapid development and change.

The historical ramparts double as both historical attraction and as a large green park by the city centre. The ramparts and the grid plan of the streets, have become some of Fredericia’s most defining traits, along with Fredericia Theatre, cruise ships, MesseC – exhibition centre and the beautiful nature. Furthermore, Fredericia is known as a logistic hub with an ever-expanding business life.

A large area at the harbour, which used to be home to a shipyard and a chemical factory, is now being transformed into the new Canal District (Kanalbyen). This new, attractive neighbourhood will feature apartments, shops and restaurants and office spaces.

The city’s founder King Frederik III could not afford his expensive dream to imitate Venice in Fredericia. With the Canal District, his idea has been reignited, as the plans for the Canal District are inspired by the old drawings from the 1600s.
The popular apartments that are being built in the Canal District will have views of the Little Belt, the canals, the new Little Belt Bridge, Funen across the water, playful porpoise and cruise ships.

During the development of the harbour, the area is being put to use for a range of temporary activities like urban gardens, pop-up shops and sports facilities. You can read more about the project via the link to the right.

The Canal District borders directly to the city centre. Today, Fredericia has 1.4 km of pedestrian shopping streets and over 120 shops and restaurants in the city centre. And then there’s the theatre! Fredericia Theatre is renowned both in Denmark and internationally for its outstanding productions. The Danish Musical Academy is also located in Fredericia.

Fredericia is home to wide range of large corporations. The central location in the country, makes it business hotspot. Some of the corporations include The Danish Military, Ørsted Energy, Shell, Carlsberg, DSB (Danish National Rails), PostNord and Arla. One of Denmark’s largest harbour operators ADP is also located in Fredericia and most recently Google has purchased a large plot by Fredericia’s business district DanmarkC. In this district, a significant number of transport- and logistics companies also have their base.
Many people also know Fredericia from visits to trade shows and exhibitions at MesseC – the third largest trade show and exhibition center in Denmark.

Fredericia is located right in the transportation heart of Denmark with freeways and railways connecting here. This is why Fredericia Train Station is one the largest and busiest in the country. The daily number of departures from Fredericia matches that of Aarhus H (the second largest city in Denmark).
Although part of the industrial companies at the harbour have been shut down, Fredericia Harbour is still one’s of Denmark’s biggest harbours. In fact, in terms of cargo handling it is the biggest.

Cruise ships are making their way to Fredericia too. Through the past few years, more and more cruise operators have opted for Fredericia as a cruise destination. The close proximity to a wealth of great attractions is of course, one of the big selling points. But the cruise lines are also choosing Fredericia because of the historical sights and because here, they can drop anchor just a few hundred metres from the city centre.

Fredericia Municipality is home to more than 51.000 people – about 40.000 living in the city of Fredericia. The population is growing, so every year more and more people choose Fredericia.

All in all, ”it’s not half bad” as the grounded people of Jutland would say.