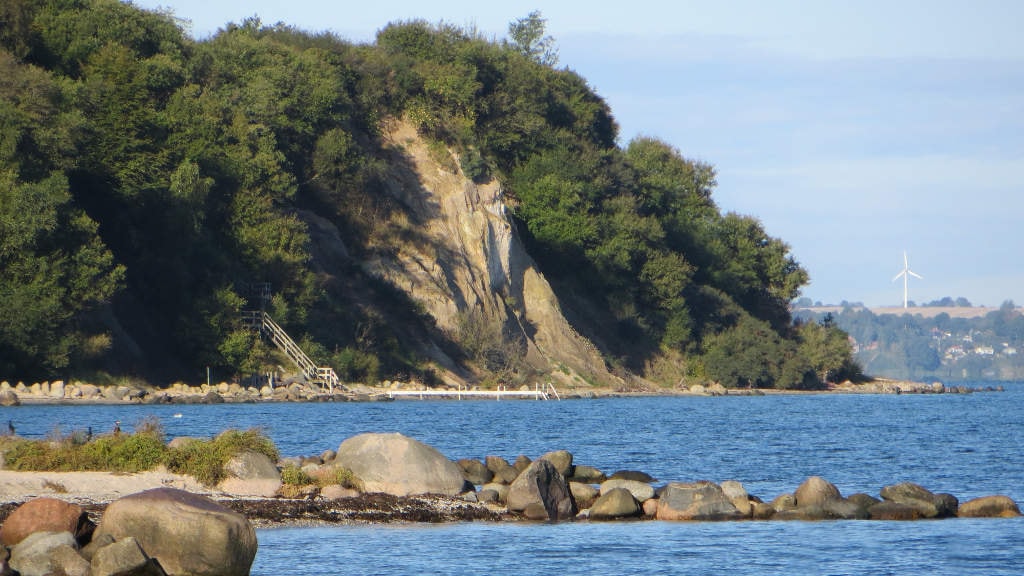 15 unique nature sites, stretching from Skagen to Bornholm, form Denmark's Nature Canon. One of them is right by the Little Belt ...

Geologically speaking, the area of Trelde Næs is unique. In the great 30 metre high clay slopes facing north towards Vejle Fjord, you can see clearly defined layers and sediments which date back more than 50 million years. The layers were created through no less than three ice ages and one interglacial period which brought the giant ice masses to a brief halt 400.000 years ago. Trelde Næs is also a good spot for finding fossils. The area has been appointed national, geological area of interest and for good reason.

Along the south side of the peninsula, is a 6 km long untouched coastline with dramatic landslide formations. It is the longest and most remarkable of its kind in Denmark. The clay here, was once the bottom of an ocean which covered the northwestern part of Europe some 55 million years ago. One of the fossil types that can be found in the clay is teeth from sharks that roamed the ocean millions of years ago.

The Danish Society for Nature Conservation has named the Trelde Forests one of the most biodiverse forest areas in Denmark. Trelde Næs is home to an extraordinarily rich flora and fauna. If you are interested in mushrooms, it is one of Jutland's best hunting fields. You may also come across the rare Marsh Orchid, which is only found in a few other spots in Denmark.

The history of Trelde Næs

The tip of Trelde Næs was purchased by Fredericia Municipality in 1966 and was made a protected area. But the history of Trelde Næs is not entirely peaceful.

I early medieval times, the lawless Count Trolle known as the King of the Ness roamed the area. During the 14th-15th century, Trelde Næs belonged to the Crown's estates. Later, Trelde Næs was subject to many disputes between local lords and landowners. They were especially interested in the rights to the exceptional amounts of herring in the waters by Trelde Næs.

In 1657, the area was occupied by Swedish soldiers who burned down all the farmhouses in the village Trelde. Luckily, the farmers had escaped into the Trelde Forests in time. But they were forced to stay in hiding living in caves in the forests for more than a year.

In 1919, Trelde Næs was bought by business owner Harald Plum who used it as a summer retreat for his employees. Plum went bankrupt in 1923 and took his own life in 1929. By then, Trelde Næs had been turned into a public retreat with a summer time pension and a restaurant.

In 1930, Trelde Næs was sold again. It was then owned for years by Ane Ryholt who became known as the Queen of the Ness. Ane Ryholt was a headstrong character who guarded her personal life so much, that she eventually closed off Trelde Næs to the public and had gates and barbed wire fences installed around the estate. There were rumours, that Miss Ryholt kept guard dogs and sometimes threatened trespassers with a hunting rifle. Others claim she was kind and helpful, as long as her privacy was respected. Ane Ryholt was in charge of a number of successful restaurants in Copenhagen and Trelde Næs was initially her summer residence. Later, she moved permanently to her beloved estate and lived there until she died. She had sold the property a few years prior to her death, but the sale was conditioned by her right to stay for the remains of her life. Her ashes were spread on the lawn by the main house Troldehuset and a few years later the municipality placed a bust to mark her final resting place.

Today, the beautiful area is open to the public and Troldehuset (which means the Troll House) is used mainly for school camps.

If you want to explore Trelde Næs with a guide and learn more about the special nature and history of the area, private guided tours can be arranged upon request.

Trelde Næs is easily reached by car, bus or bicycle. You will find a large free parking lot, with direct and easy access to the beach and the forest.
The parking lot is located at the address Trelde Næsvej 290.

You can pick up a brochure about Trelde Næs at the tourist information at the library in Fredericia.
There is a map of the forest by the Trelde Næs parking lot and hiking trails of different lengths are marked in the forest.

At the Nature Centre at Trelde Næs Beach, you can read more about the nature and borrow free equipment for activities like crab-fishing, bonfires etc.

Public restrooms can be found at the Nature Centre. The restrooms are open all year round, but can occasionally be closed during winter, to avoid frost damage to the pipes. By the little farm by the parking lot, there is a handicap restroom which is open all year round.

Note: For day-trips to the area, we recommend you bring your own food and drink, as it is not possible to buy anything at Trelde Næs. The nearest mini market is located at DanCamps Trelde Næs about 800 m from the parking lot.

It is possible to spend the night at Trelde Næs at one of the area's two shelter camps.